Woof Acres is dedicated to helping rescue dogs find the homes they deserve.

Our Mission at Woofy-Acres is to help reduce the suffering of shelter dogs and eliminate the risk of being euthanized by rescuing our furry friends and providing them a temporary home while awaiting a loving adoptive forever home.

We strive to make finding your new family member a seamless process. We offer fostering and mentoring opportunities to individuals and families while they decided if adoption is the best choice for them.

Our Rescues Are Our Passion

Why Not Give A Little To a Dog In Need? Learn More »

A Word From Woofy’s Founder, Dianne

Forming this organization has been a labor of love for dogs and a strong desire to save them from the cold, noisy, scary environment associated with shelter care. Forming a rescue has long been only dream, until a couple of recent experiences became the catalyst to the forming of Woofy-Acres.

The first catalyst was attempting to rescue Jasper from a county shelter after being owner surrendered. Because a prior adoptive family returned him, he was marked as “rescue only” resulting in a county requirement that he be released to a rescue only, making it impossible for the average person to get him. I thought it would be an easy process, as there are rescues everywhere, but very quickly I learned of the bureaucracy and lack of organization affecting many rescues. I must have attempted to contact no less than 2 dozen rescues, but to no avail.

After spending a full day at the shelter, attempting to solicit the help of one of the many rescues in and out of county shelters throughout the day, a wonderful woman put me in contact with a rescue who offered to help. But, his release was contingent upon completion of a four-page application and home inspection. It was a grueling experience to say the least.

The second catalyst was my son finding a small dog in the middle of the street during the height of traffic. As cars recklessly sped around her, it was a wonder she was not killed. “Lady” was discarded by her family at less than 2 months of age. The vet suspected a breeder discarded her after finding out she had multiple medical conditions. Ultimately after 2 months, Lady passed away. She had a short life, but was given the love she deserved during her short time on earth. As a result of our experience with Lady, Woofy Acres has committed to taking in two dogs with medical conditions that would make them otherwise unadoptable and most likely euthanized. 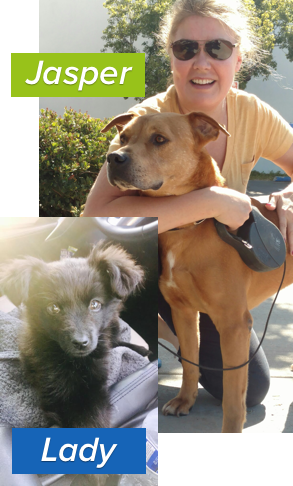 Want to share the
joy of a happy home?

Why Not Give A Little To a Dog In Need? Learn More »